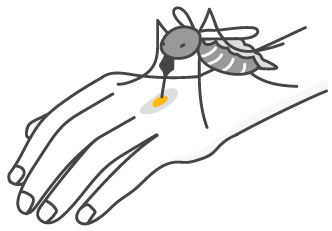 YOU CAN SELECT MORE THAN ONE MEMBER

Since the COVID-19, there have been a lot of awareness on all sorts of diseases and viral infections. After all, the pandemic has been a stark reminder on the importance of both health and healthcare infrastructure.

Awareness is said to be the first step to any type of progress, including the progress we make towards our overall health and wellbeing.

That’s why, we’ve put together this health guide for you on vector-borne diseases. Everything from what are vector borne diseases, types of vector diseases and treatment and preventions you can take to protect yourself from the same.

What is Vector Borne diseases?

As the WHO defines it, vector-borne diseases are human illnesses caused by parasites, viruses and bacteria that are transmitted by vectors.

And, what are vectors?

Vectors are mosquitoes, ticks, and fleas that spread pathogens. A person who gets bitten by a vector and gets sick has a vector-borne disease.

How prevalent are vector-borne diseases?

Vector-borne diseases are one of the most vital global health problems that are often associated with a lot of economic burden for the countries affected. They mainly occur in tropical and subtropical regions; since these illnesses are primarily transmitted by hematophagous arthropods including mosquitoes, ticks, sand flies and triatomine bugs.

Unfortunately, in the past forty years - there has been a growth in the emergency and re-emergence of many vector-borne diseases primarily due to population growth, urbanization, globalization and lack of public health infrastructure.

And, how serious is it?

Some of the most common vector-borne diseases across the world include Malaria, Dengue Fever and Yellow Fever among others.

Vector-borne diseases account for 17% of the estimated global burden of all infectious diseases, and every year there are approximately 700,000 deaths due to the same all over the world!

Here’s a list of some examples of vector-borne diseases, divided according to their vectors.

Source: The World Health Organization (WHO)

The dengue fever is an extremely common vector borne disease in India, spread through the mosquito bite of the daytime feeder, Aedes aegypti. Thousands of people are affected every year in India, especially during the monsoons.

Just like in most vector borne viruses, the dengue fever too has symptoms like the flu. However, in dengue fever extreme dehydration and loss of blood may occur as well.

Currently, there is no direct cure or vaccination for the dengue fever but one’s condition can be improved and cured through a combination of medical and home treatment. To read more about the dengue fever, its preventions and treatment measures, you can read our dengue health guide here.

Malaria has a long history in India. In fact, it is still pretty much an epidemic in India. Malaria is spread through the bite of the female anopheles' mosquito, which in turn is a carrier for a parasite called Plasmodium.

The World Health Organization (WHO) data shows that 219 million people were infected with malaria and 435,000 died worldwide from the disease just in 2017. While India saw 429,928 cases of malaria and 96 malaria deaths in 2018!  (Source: National Vector Borne Disease Control Programme)

Although India hopes to be malaria-free by 2030, currently almost 87% of malaria cases in South-East Asia are from India itself. The same can be currently treated with proper medical treatment.

You’ve probably heard about the zika virus and have read much about it while traveling internationally at airports (before COVID-19 came into the spotlight of course!).

India’s first case of the same was back in 2018 after which the central health authorities undertook various programs for testing –  it was then found that around 157 people were infected, and tested positive.

Surprisingly, the Zika Virus is caused by the same mosquito that causes dengue, chikungunya and yellow fever. It too bites during the daytime.

However, it is not life-threatening, but it is said to lead to severe defects for newborns if a pregnant woman is infected with the same.

The good news however is that, currently zika virus is quite rare in India.

Less heard of but actually common in India, especially in kids between three to six years old. The Japanese encephalitis affects both humans and animals, and is spread through vectors like mosquitoes, pigs and water birds. It is the major cause of encephalitis (inflammation of one or more parts of the brain) all over Asia.

Just last year, more than 150 infants and children died due to this viral disease in Muzaffarpur, Bihar after eating contaminated litchis. In India, still around 1500 to 4,000 cases are reported every year!

Less than 1% of those infected actually show clinical symptoms until inflammation is developed in the brain, altering its functions. The good news however is that the same can be prevented with vaccine and is recommended, especially in high-risk areas.

The Nipah Virus is transmitted to humans through animals like infected pigs and bats. In fact, there was an outbreak of the same back in 2001 and it was then that it was noticed that it can also spread from one infected person to another.

In India and Bangladesh, the Nipah Virus is said to most commonly spread through date palm saps that are contaminated with either urine or saliva of fruit bats.

Like most viruses, the symptoms of the Nipah Virus infection too are flu-like symptoms that can occur up to 5 to 14 days from being affected.

As the infection spreads further in the body, it can lead to respiratory illnesses and encephalitis (inflammation of one or more parts of the brain).

Fortunately, today, the Nipah Virus is not as common as it was. Kerala last saw only 19 cases of the same in 2018 and there was a threat in 2019 too, but luckily local healthcare facilities were able to avoid even a single causality!

In the worst-case scenario, if you do get infected – It’s always better to ensure you have a health insurance that covers vector borne diseases as illnesses are unpredictable and unplanned and the least, we can do is be prepared for the worst.

If unfortunately, you or a family member are infected with any vector borne diseases, here is an approximate on what treatment costs could look like in India for the same.

To get an idea about the same, let’s take a look at the two most common vector borne diseases in India, i.e. Malaria and Dengue Fever.

Note: On an average, when you add up all expenses (and based on the number of days you have to be hospitalized, and the severity of your condition and the medicines prescribed to you) treatment for dengue fever and malaria can cost up to Rs 25,000 to Rs 75,000.

Disclaimer: The above are costs are only approximate average costs and can still differ based on the severity of your health condition, city you live in and the hospital you choose to get treated in.

Whether it is malaria, dengue or even the COVID-19, one thing is for sure is that medical treatment and healthcare services today are not cheap.

Additionally, depending on your age, health condition, city you live in and the hospital you pick – cost of treatments can differ from person to person.

However, if you are protected and covered for with a health insurance you can ensure you don’t need to bleed your pocket or go through financial distress in times where you need treatment.

After all, more than anything – quality healthcare and treatment is vital in fighting viruses and illnesses.

Today, fortunately – health insurance is growing in India and this means, there are various options you can choose to protect both your health and wealth.

At Digit, while we offer a range of health plans – we also offer a customized health insurance policy that will help cover for both the COVID-19 and vector-borne diseases.

✓ How is vector borne diseases spread?

Vector borne diseases are commonly spread from bites of the vector (such as mosquitoes, ticks and fleas) or through an infected animal/human to another animal/human.&nbsp;

Vector borne diseases are commonly spread from bites of the vector (such as mosquitoes, ticks and fleas) or through an infected animal/human to another animal/human.

✓ Is typhoid a vector borne disease?

No, typhoid is a highly contagious water borne disease which means it spreads through contaminated food and water.

No, typhoid is a highly contagious water borne disease which means it spreads through contaminated food and water.

✓ Is AIDS a vector borne disease?

No, AIDS isn’t a vector borne disease as it isn’t spread through insects or any other vectors. Instead, AIDS can only be transmitted through direct contact with human bodily fluids such as blood, semen, and breast milk.&nbsp;

No, AIDS isn’t a vector borne disease as it isn’t spread through insects or any other vectors. Instead, AIDS can only be transmitted through direct contact with human bodily fluids such as blood, semen, and breast milk.

✓ Is cholera a vector borne disease?

No, cholera is a water borne disease that is spread through contaminated water or food, like typhoid.&nbsp;

No, cholera is a water borne disease that is spread through contaminated water or food, like typhoid.

✓ Is plague a vector borne disease?

Yes, the plague is a vector borne disease. As per the WHO the plague is caused by the bacteria Yersinia pestis, a zoonotic bacteria, usually found in small mammals and their fleas.

Yes, the plague is a vector borne disease. As per the WHO the plague is caused by the bacteria Yersinia pestis, a zoonotic bacteria, usually found in small mammals and their fleas.

✓ Is Tuberculosis a vector borne disease?

No, tuberculosis isn’t a vector borne disease but, is actually an airborne disease which means it spreads from person to person through air.

No, tuberculosis isn’t a vector borne disease but, is actually an airborne disease which means it spreads from person to person through air.

All about Breast Cancer

History of Major Plague Outbreaks in the World

World's Deadliest Diseases in the History

History of the Spanish Flu

All about Kidney Failure

All about Heart Attack

How do you get Kidney Stones?

What is Skin Cancer?

What is a Stroke?

What is Lung Cancer?

Signs and Symptoms of Asthma

What is Bird Flu Disease?

What is Heart Normal Rate?

Effects of Caffeine on Health

How to Reduce Blood Cholesterol Levels?

All You Need to Know About Renal Diseases

What is Rheumatoid Arthritis?

What is Cirrhosis of the Liver?

What is Skin Lesion?

What is Mental Illness?

What is Congestive Heart Failure?

What is Congestive Cardiac Failure?

Most Common Cancers in India

Disclaimer #1: *Customer can choose options at the time of availing insurance. Premium amount may vary accordingly. Insured is required to disclose any pre-existing condition or on going treatment before policy issuance in the proposal form.

Disclaimer #2: This information is added only for informative purposes and collected from different sources across the Internet. Digit Insurance is not promoting or recommending anything here. Please verify the information before making any decisions.